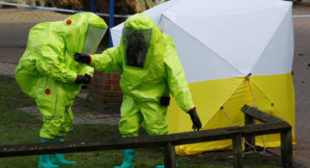 Almost twenty years ago, the US Department of Defense was involved in dismantling a chemical research institute in the former Soviet republic of Uzbekistan, where the Novichok nerve agent was tested, according to the New York Times. A New York Times article published back in 1999 has revealed that the US closely cooperated with the former Soviet republic of Uzbekistan to decontaminate the Chemical Research Institute in Nukus, described by the newspaper as “one of the former Soviet Union’s largest chemical weapons testing facilities.”