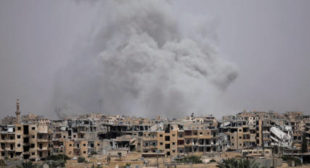 Damascus called on the UN Security Council to “stop the US-led coalition’s crimes against Syrian citizens,” a statement issued by the Syrian Foreign Ministry said.

Syria calls again on the UN Security Council to fulfull its obligations for the sake of peace and security, and to stop the crimes of the US-led coalition against Syrian citizens,” the document read.