NIMBY in America: The US Struggles with its Large Homeless Population 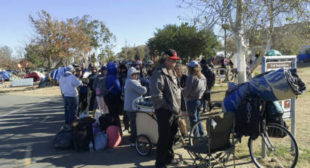 A bitterly-fought political campaign to address the rapidly-growing homeless population in a wealthy southern California county points to the yawning inequality gap in the US. A wide-ranging plan in southern California’s Orange County that was intended to relocate hundreds of homeless — including children, women and the elderly who had been forcefully kicked out of long-term camps by placing them into nearby shelters — has been halted after well-heeled residents raised an outcry.