DONALD TRUMP IS A PUPPET AND JUST AN ACTOR 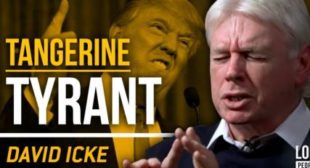 To some David Icke is a charismatic rebel fighting against the unseen powers which rule the world. To others he is a dubious figure deserving of scorn and ridicule. But whatever you may think of him, David is one of the world’s most prominent conspiracy theorists and has a global following to match.

His controversial claims include that the world is run by a secret cabal of alien lizards who appear to us as well-known public figures. But there is more to him than meets the eye, Long before his theories became public he was a professional footballer and, later, a prime-time BBC presenter and journalist.