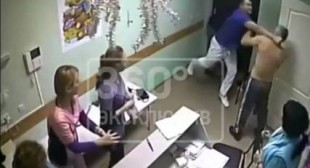 A video of a well-built male doctor knocking out a patient in a hospital in the Russian town of Belgorod has emerged online. The man died, while his companion, who tried to stand up for him, was also brutally beaten by the doctor.

The incident happened on December 29 last year in municipal hospital of Belgorod in southwestern Russia. The violent attack was captured by the hospital security camera, and emerged online days later, with some 700,000 people having watched it in a day.