What Does Bernie Want? 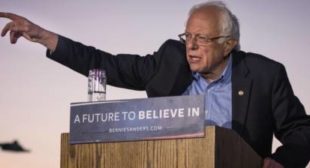 The Democratic establishment and liberal commentariat lathered itself into a fine hysteria last week. What began as a Clinton surrogate meme -(Bernie has done his job, but now he’s hurting Clinton and should get out of the race) – became a maddened chorus.

The predictably angry reaction of Sanders delegates —and truly deplorable behavior by some —to preemptory rulings by a pro-Clinton Nevada party chair was blown into a mythical scene of chair-throwing violence,