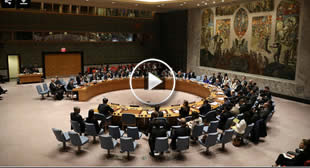 The US has hinted it may take its own action in Syria, unless the UN Security Council takes action to prevent the use of chemical weapons in Syria. It comes after a reported chemical weapons attack in the Idlib province, which rebels blamed on Damascus.

The UN Security Council convened on Wednesday to discuss a draft resolution proposed by the US, the UK and France, which would condemn Damascus for the reported chemical weapons attack in the town of Khan Sheikhoun on Tuesday morning.