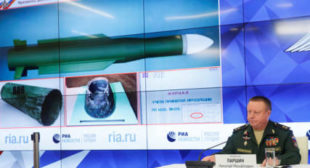 The Russian military’s conclusion that the missile that brought down Malaysia Airlines flight MH17 contained Ukrainian serial numbers is important information that should be considered in the international probe, analysts told RT.

On Monday, the Russian military announced that the serial numbers found on debris of the Buk missile that downed MH17 over eastern Ukraine show it was produced in 1986 and owned by the Ukrainian military.