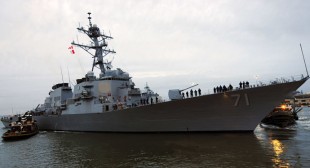 Ukrainian and American naval forces are taking part in joint maritime drills dubbed Sea Breeze 2014, which began on Monday in the northwestern part of the Black Sea and will last till September 10.

“Today in the north-west part of the Black Sea, we are beginning the joint Navy exercises of Ukraine and the US, known as ‘Sea Breeze 2014’. The exercises will continue until September 10. The aim is to set up safety measures in areas dangerous to ships,” Colonel Andrey Lysenko, spokesman for Ukraine’s National Security Council, told reporters as cited by AP.