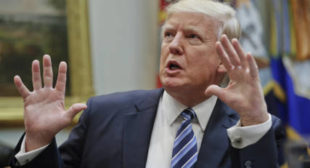 America’s chronic trade deficit with the rest of the world is testimony to a failed US economy. In reality, the US has no-one else to blame but itself for such an historic failure.

But in typical chauvinist fashion, the Trump administration has found a handy scapegoat by blaming China — its top bilateral trading partner. President Donald Trump this week ordered a probe into alleged trade malpractices by China, including claims of intellectual property theft and unfair subsidies.