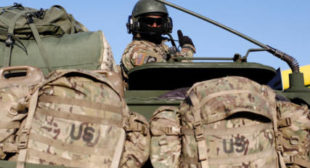 The US Army is to further bolster the number of troops it has stationed in Europe by a further 1,500, despite repeated complaints by President Trump that NATO allies are not spending enough to defend the continent. US Army Europe said the troops will be deployed to Germany by September 2020, calling it a “display of our continued commitment to NATO and our collective resolve to support European security,” AFP reports quoting a statement from the service.