‘Ukrainian PM should be tried for war crimes’ – Russian investigators 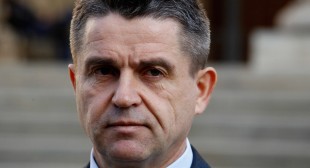 Prime Minister Arseny Yatsenyuk is responsible for numerous war crimes committed by the Ukrainian military and law enforcement and sooner or later will face a trial, the spokesman for Russia’s Investigative Committee has said.

“Yatsenyuk was among many well-known persons, including top military officers, who personally issued orders to fire upon the civilian population of Donbass,” Vladimir Markin said in an interview with Zvezda television.