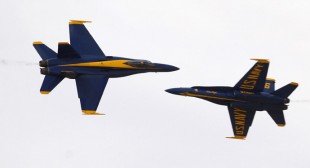 Two US Navy F/A-18 Hornets have crashed in the western Pacific Ocean, the US Navy has confirmed. One pilot has been rescued, while the second is still missing.

“Two F/A-18 Hornets from Carrier Air Wing 17 embarked on the aircraft carrier USS Carl Vinson (CVN 70) crashed at 5:40 p.m. local time, today, while operating at sea in the western Pacific Ocean,” said a statement from the US Navy.