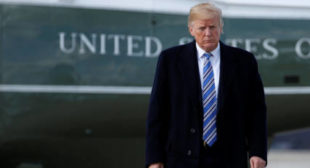 Earlier in the day, the US President took to Twitter to call for Russia to “get ready” for “nice and new and smart” missiles in Syria as a response to the alleged chemical attack in Douma – the tweet was followed by another one, urging Moscow to stop what he described as an “arms race.” After threatening to attack Syria, POTUS scaled back the rhetoric 40 minutes later with his next tweet reading that Moscow needed Washington’s help in economy, suggesting working together and ending what he called an “armed race.”