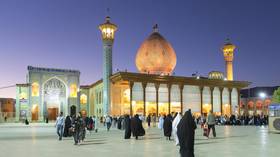 Trump said Iran is in conflict with the ‘civilized world,’ but civilized states don’t seek regime change, lead aggressive wars, and trash international law like the US has done more than once. So, who are the true barbarians? With every line, Donald Trump took the breath away from the watching audience and even some of the horseshoe of military brass behind him when he responded to the Iranian retaliation to his reckless (and illegal) assassination of Iranian General Qassim Soleimani.