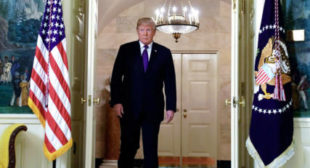 Friday’s attack on Syria was a face-lifting move by Donald Trump after he boasted about his missiles on Twitter, Virginia Senator Richard Black said. He told RT that Trump would not have won Congress’ approval had he asked for it. Trump chose to bypass the Congress, drawing the ire of some within his own Republican party, because he had next to no chance of drumming up their support to start a war, Republican Virginia Senator Richard Black told RT.