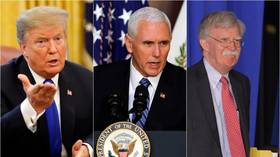 Donald Trump, Mike Pence and John Bolton – best known for their “erratic and aggressive” traits – are a “toxic mixture” that leaves Europe less secure, a reputable German MP has warned. Chancellor Angela Merkel’s government hoped that it could quietly wait for the Trump administration to end, but that was “a bitter illusion,” Jurgen Trittin, formerly minister for the environment and now a prominent Green Party MP, argued in an op-ed for Frankfurter Rundschau newspaper.