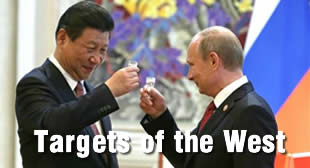 What is the bigger story? The West Against the Rest or The West Against Itself? The Illiberal Quartet of Xi, Putin, Rouhani and Erdogan is in the line of fire of haughty homilies about Western “values.” Illiberalism is arrogantly and provocatively depicted in the West repeatedly as a Tartar Invasion 2.0. But closer to home Illiberalism is responsible for the social, civil war in the U.S. as Trump’s America has long ago forgotten what the Europe Enlightenment was all about.