The Syrian War What You’re Not Being Told 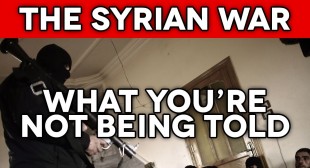 What’s really going on in Syria? Let’s look at the evidence. TheJules1003 Islam has extremists that want war but they are a minority and you cant blame every one for the extreme few. Unfortunately in America the extremist few are the ones who covertly fund and support dictators tyrants and terrorists world wide but you cant blame all Americans as the few work in secret and deny their actions to their own people. The racist views against Islam are a result of propaganda geared towards justifying the massive defense budget. A bogey man to scare the public with.