The richest and most war-mongering nation on Earth is still addicted to bombing poor, defenseless nations 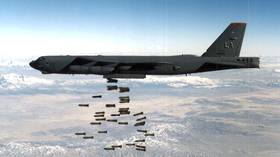 A nation-state version of a psychopath, the US refuses to give up its addiction to bombing innocent people. In just over a month, it’s bombed Syria, Iraq, Somalia and Afghanistan – and shows no signs of developing a conscience.

Kill anything that moves March 15, 1968 was a normal day in America. The sun was shining. The birds were chirping. Race riots in Mississippi were entering their fifth day or so. And at the other end of the globe, in Vietnam, soldiers of the Americal Division’s Charlie Company, 1st Battalion, 20th Infantry Regiment, were being briefed by their commanding officer, Captain Ernest Medina, about the exploits of the next day, which would later be dubbed the “My Lai massacre” – where 500 unarmed Vietnamese civilians were systematically butchered in over four hours, not counting a lunch break the soldiers took in the middle of the carnage. The orders were clear and explicit: the soldiers were to kill every single human being, burn all houses, kill all animals, destroy all food supplies and poison all wells.