The Dangerous Erosion of U.S. Leadership 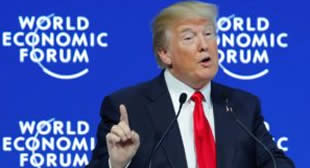 Despite Donald Trump’s speech to the World Economic Forum in which he attempted to reassure global leaders on his “America First” ideology, the damage to U.S. credibility may already be done, as Alon Ben-Meir explains.

Just one year after Donald Trump was inaugurated as the 45th president of the United States, the U.S. has already experienced alarming setbacks to its global leadership role and has badly damaged its image.