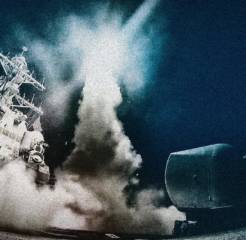 On April 6, United States President Donald Trump authorized an early morning Tomahawk missile strike on Shayrat Air Base in central Syria in retaliation for what he said was a deadly nerve agent attack carried out by the Syrian government two days earlier in the rebel-held town of Khan Sheikhoun.