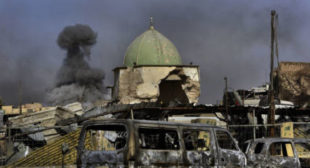 Former MP George Galloway has called on the US cabinet to impeach Donald Trump, labeling him a “man child” and questioning the American president’s sanity after he promised to launch “smart” missiles at Syria. Trump took to his Twitter account to warn Russia to “get ready” as missiles “will be coming, nice and new and ‘smart!’” at its ally, Syria. Trump’s comments come following a pledge made by Moscow’s envoy to Lebanon, Alexander Zasypkin, who said that the Russian military reserves the right to shoot down missiles and destroy launch sites in the event of US aggression against Syrian leader Bashar Assad.