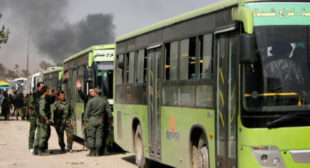 Not everybody is buying into reports of a chemical attack by Syria’s government in Douma, with online critics saying the claims conveniently coincide with Donald Trump’s plans to leave Syria and the withdrawal of Ghouta militants. Anti-government activists, including the notorious White Helmets civil defense group, on Saturday blamed the Syrian authorities of using chemical weapons in the militant-held town of Douma in Eastern Ghouta, saying that dozens of civilians were killed and hundreds affected.