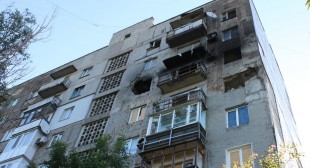 RT reporter Roman Kosarev, who was recently caught in shelling in Syria, says the atrocities he has seen at hotspots such as Syria and Eastern Ukraine have at times rendered him speechless, but this is also where unprecedented compassion can be found.

We live in scary times. War, death, destruction, tears, hunger, refugees, indifference, carelessness, the glorification of the heinous and vulgar, the disregard of basic human values, dividing the world into those who are ‘right’ and those who are ‘wrong’, and so on.