Still BFF? Turkey’s Erdogan attacks US over support of Kurds, blames it for Syrian ‘sea of blood’ 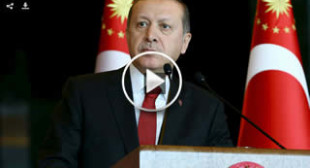 In an angry tirade Turkish President Recep Tayyip Erdogan has accused Washington of causing the bloodbath in Syria by not recognizing as terrorists the Kurdish forces fighting against Islamic State in the region.

Bringing a new level of pressure to bear on its NATO ally, the Turkish president questioned Washington’s commitment as a fellow coalition member.