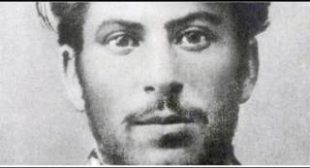 Dan, a member of Red Youth and the CPGB-ML, presents the facts of Stalin’s life and contribution to the Bolshevik cause, before, during and after the October Revolution.

In his own words: “Why bother discussing Stalin and the Soviet Union today?

The case is closed, every news article adds a mandatory ‘dictator’ or ‘totalitarian’ as a prefix.” Life in the Soviet Union is depicted – entirely falsely – as being “more terrifying than imperialist world wars, British concentration camps in South Africa, engineered famine in Bengal, the invasion, subordination, and plundering of over a quarter of the world.”

“More horrific than imperialist adventures in Iraq, former Yugoslavia, Afghanistan, Pakistan, in Iraq again, in Libya, Syria, and still in Gaza, still in the West Bank, still in Palestine.” “And those are just the headlines within my lifetime, imperialism fighting the consequences of imperialism for the benefit of imperialism.

“When the oppressed of the world throw off the shackles of imperialism taking back their land, their resources, their industries, built with their toil and their lives, as they follow in the footsteps of Lenin, Stalin, and the Soviet Union to destroy the old order, based on the oppression of the working class majority by an ever-decreasing minority of capitalists and build a new society of mutual co-operation for the advancement of humankind, this is not a noble or just cause in the eyes of the bourgeoisie.

“However, it is a moral and practical imperative for the global proletariat. “We have faced almost a century of all-out ideological war from the bourgeois camp and their petty-bourgeois agents. they are determined to neuter the revolutionary potential of the working-class, to erase the achievements of the people struggling and working for the benefit of the majority, and to obfuscate the path to socialism.”

The contrast between the myth (Stalin the ‘bogeyman’) and the reality of Stalin as a vibrant, heroic and passionate champion of the interests of the working masses could not be more stark. We must learn from the wealth of Bolshevik theoretical and historical experience, in order to successfully guide the struggle against the British imperialist bourgeoisie. That is why we must defend Stalin and the Soviet Union against incessant and entirely false attacks of our ruling class and their hired ‘intellectual’ servants.