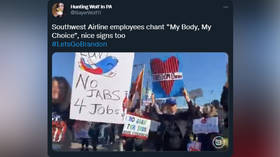 Current and former Southwest Airlines staff have gathered outside the company’s headquarters in Dallas, Texas to celebrate “medical freedom” and called on the airline to ditch its vaccine mandate.

On Monday, hundreds of demonstrators held signs aloft that read, “Terminate the mandate,” “Freedom not force” and “No jabs for jobs,” as they convened at Southwest Airlines’ headquarters in Dallas to protest against the mandate.

Attendees chanted “My body, my choice” as they lined the highway outside the airline facility. Some carried US flags, while another waved a flag adorned with an eagle superimposed on the stars and stripes.

In footage shared on Twitter, one pilot taking part in the protest said that the airline must stop its “medical tyranny”.