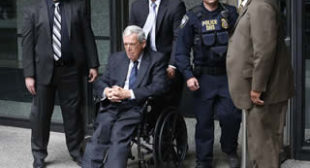 Former Republican Speaker of the House Dennis Hastert was sentenced to 15 months in prison on Wednesday after a judge referred to him as a “serial child molester,” making him one of the highest-ranking politicians in US history to go to prison.

Hastert, 74, pleaded guilty last year to paying $3.5 million in hush-money to a man to keep the molestation secret.