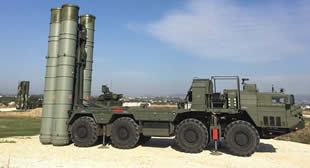 Russia plans to deploy one of its best air defense systems, the S-400 Triumf to Crimea in August. The regiment that will protect the skies over the Black Sea peninsula from NATO’s “air hooligans,” as Crimea’s Vice Premier Ruslan Balbek put it, will be stationed in the port town of Feodosia.