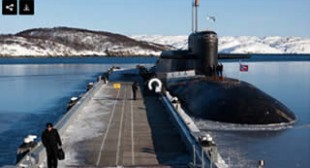 Six vessels fom the Russian North fleet have left their base in Severomorsk in the Barents Sea and set off for the New Siberian Islands, where a military base under reconstruction will start functioning later this year.

“The major goal of the latest expedition of the North fleet ships to the Arctic is to deliver personnel, equipment and property of the North fleet’s tactical group, which starting this year is going to fulfill military service at the New Siberian Islands on a permanent basis,” said the North fleet commander, admiral Vladimir Korolyov.