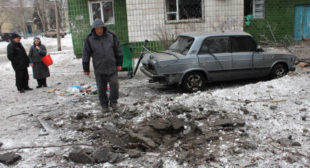 Russia’s top federal investigative agency has begun a criminal case into the deaths of civilians in Donetsk that were reportedly the result of shelling by Ukrainian government forces on February 1-3.

According to Investigative Committee acting chief spokesman Svetlana Petrenko, a criminal case has been launched into the use of illegal methods of warfare.