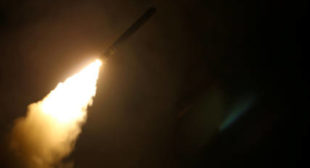 A Russian military contractor, specializing in electronic warfare, will use information gained from dissecting a US Tomahawk cruise missile, used during an attack on Syria, to boost the capabilities of its own equipment. The missile, delivered to Russia after the tri-party night attack on Syrian government targets by the US, the UK and France in April, is of particular interest to KRET, a leading developer of electronic equipment for the Russian military, according to Vladimir Mikheev, an aide to the company’s First Deputy Director Vladimir Zverev.