Russia will always be a part of Europe, so it’s high time for relations to improve, Austrian foreign minister tells Moscow’s envoy 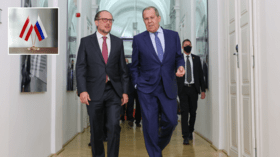 Austria’s top diplomat has warned ties between Moscow and the EU have hit historic lows and argued that both sides now need to urgently work to turn things around and form a partnership, given the importance of economic relations.

Speaking at a press conference on Wednesday following talks with his Russian counterpart, Austrian Foreign Minister Alexander Schallenberg lamented the dismal state of bilateral affairs. “It is painful to realize that relations between the EU and Russia have hit their worst point at the moment,” he said.

“The gap between the West and the East has deepened more and more recently, and this cannot be and should not be in our interests,” Schallenberg added, while reiterating that Vienna has major differences with Moscow over issues like the jailing of opposition figure Alexey Navalny. However, according to him, Russia is a part of the reality of Europe and will continue to be, so a rapprochement with the EU should be a key priority.