Russia offers NATO an olive branch, but is reconciliation in NATO interests? 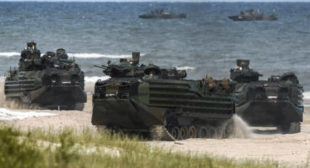 Russia has invited NATO’s military experts to Moscow in September and offered a “positive program” for developing relations with the military alliance — but is reconciliation really what NATO is interested in?

Russian Deputy Defense Minister Anatoly Antonov said the proposal was aimed at decreasing tensions and that Moscow was ready for a constructive approach, despite differences between the two sides.