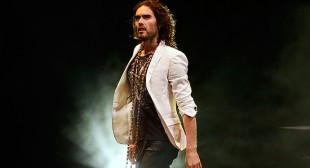 Comedian Russell Brand used his web series The Trews to blast Fox News’ Sean Hannity for “using intimidation, bullying” and overall hypocrisy during a segment in which the conservative host berates a pro-Palestinian guest about Israel’s offensive on Gaza.

A recent segment on Hannity’s show is prefaced with the host asking why “is America’s largest Muslim so-called civil rights group [the Council on American–Islamic Relations or CAIR] showing sympathy to terrorists? Let’s have a debate.”