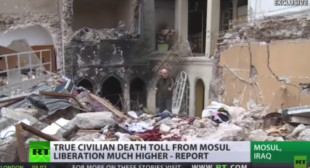 RT’s special reports about the humanitarian crisis in the Iraqi city of Mosul has netted the network its sixth International Emmy Awards nomination, earning recognition for a story that went largely ignored in western media. The finalists for the Emmy in the News category, announced on Monday, included RT’s #MosulSOS, a series of reports and a social media campaign aimed at highlighting the plight of civilians fleeing the Iraqi city as US-backed forces laid siege to the former Islamic State (IS, formerly ISIL/ISIS) stronghold.