Rising in the Polls, Sanders Takes Jabs From Trump, Warren 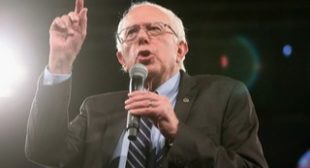 Bernie Sanders found himself on the receiving end of attacks from both President Donald Trump and Elizabeth Warren on Sunday, a reflection of his rising status in the Democratic presidential race and perceived momentum just three weeks out from the Iowa caucuses. In a tweet, Trump declared, “Wow! Crazy Bernie Sanders is surging in the polls, looking very good against his opponents in the Do Nothing Party. So what does this all mean? Stay tuned!” Sanders responded in the same medium: “It means you’re going to lose.”