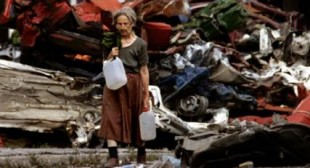 German tabloid Bild has accused starving residents of the Syrian town of Madaya of being “actors.” But RT’s correspondent believes some media simply dislike what people suffering from malnutrition had to say about rebels selling off government aid.

Last week RT’s Murad Gazdiev accompanied the Red Cross and the UN convoy that brought food to the besieged Syrian town of Madaya, some 44km northwest of the capital, Damascus, close to the Lebanese border.