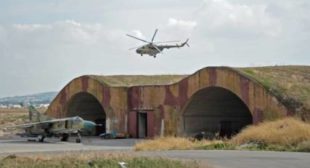 The US-led missile strike against Syria on Saturday targeted research centers and military facilities, including airfields, Russia’s Defense Ministry said, adding that none have received severe damage thanks to the air defenses. “The real targets of the attacks of the US, Britain and France on April 14 were not only Barzah and Jaramani research facilities, but also Syrian military infrastructure, including airfields,” Major-General Igor Konashenkov, a Defense Ministry spokesman, said during a briefing in Moscow.