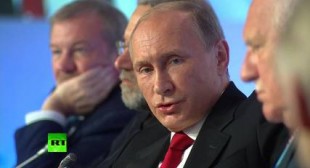 The 12th annual Valdai Discussion Club meeting in Russia’s Sochi has focused on international armed conflicts. Russian President Vladimir Putin is taking part in its final plenary session devoted to the crisis in the Middle East.

Russian President Vladimir Putin says a number of “mistakes” committed by the US, Russia and NATO following the break-up of the Soviet Union has led to the current deterioration of relations between Moscow and the West, with NATO’s expansion into eastern Europe one of the major damaging factors.