Putin lashes out at US, West for destabilizing world 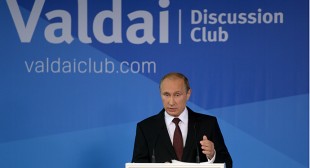 Vladimir Putin lashed out at the United States and the West for destabilizing the world order of checks and balances for its own gains. He also accused the West of inflaming the situation in Ukraine and said Russia is not interested in building an empire.

The Russian President delivered a fierce broadside aimed at the United States in a speech for the Valdai Club in Sochi, which is an informal group of scholars.