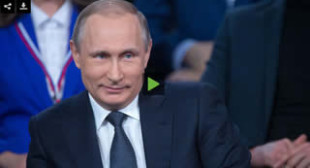 The Russian president has surprised the audience at a forum in St. Petersburg, by allowing his German language skills to shine. He stepped in as translator for the former West German Defense Secretary Willy Wimmer.

Wimmer had something to say on the topic of the national idea and value system that identifies Russia.