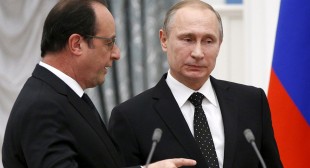 It all started with French President Francois Hollande, after the Paris attacks, having the temerity to advance the idea of France working together with Russia in the same coalition against ISIS/ISIL/Daesh in Syria.

Turkish President Recep Tayyip “no excuse” Erdogan thought NATO and Russia by this time would be at each other’s – Cold War 2.0 – nuclear throats, while Washington had brushed off Hollande’s idea with a cascade of platitudes and distortions.