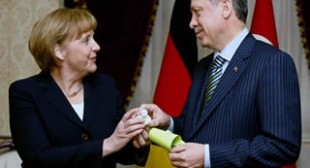 Germany shuts its eyes to the mass killings of the Kurds in southeastern Turkey, the illegal oil trade and Turkey’s collaboration with Daesh terrorists, hoping that the Turkish President will help Europe to reduce the inflow of migrants, German newspaper Handelsblatt wrote.

German Chancellor Angela Merkel ignores the fact that Turkish President Erdogan is waging war against his own people and continues to take advantage of the questionable cooperation with him on the refugee issue, Handelsblatt wrote.