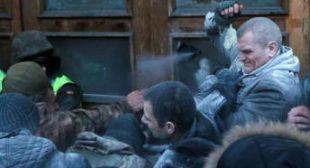 Thousands of people supporting Mikhail Saakashvili, the fugitive ex-Georgian president turned Ukrainian opposition figure, have once again taken to the streets of Kiev to take a local cultural center by storm.
Some 2,000 people turned up for yet another protest action in support of Saakashvili in the Ukrainian capital on Sunday. The demonstrators marched through the city center to Maidan Square, scene of the 2013-14 unrest which brought about the coup and subsequently the civil war in the east.