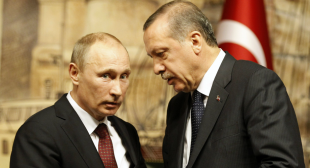 “According to information we’ve received, the senior political leadership of the country—President Erdoğan and his family—are involved in this criminal business.”

Upping the tensions between Ankara and Moscow following the downing of a Russian military jet by Turkey last week that left two Russian pilots dead, the Kremlin on Wednesday claimed it has “proof” that the president of Turkey and his family are directly benefiting from the sale of oil smuggled out of neighboring Syria by the Islamic State.