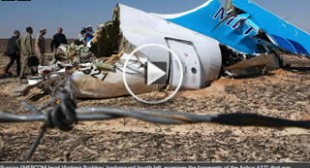 The Russian plane crash in Sinai, Egypt, was caused by a terrorist attack as traces of explosives have been found in the wreckage of the plane, Federal Security Service director Aleksandr Bortnikov told President Vladimir Putin.

“We can say that that [Sinai plane crash] was a terror act,” Bortnikov told Putin. According to the FSB chief, experts analyzed passengers’ belongings as well as the parts of the plane.