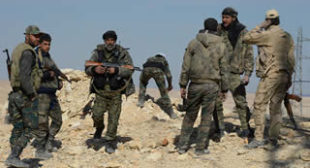 The Syrian Army launched on June 3 a large-scale offensive to liberate the city of Raqqa, the de-facto capital of the Daesh caliphate.

Retired Syrian Major General Sabet Muhammad told the Russian newspaper Izvestia that the operation started from the town of Isriya, in Hama province, nearly 140 km to the west from Raqqa.