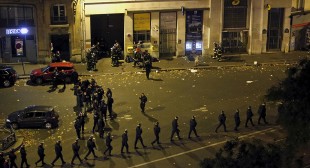 If the recent horror visited upon Beirut and Paris, as Islamic State/Daesh seeks to broaden its war against civilization, does not succeed in re-focusing the mind of the West when it comes to its role in the Middle East, then nothing will.

For far too long Western governments and ideologues have performed the modern equivalent of fiddling while Rome burns when it comes to the conflict against Islamic State (IS, formerly ISIS/ISIL) and everything it represents.